A Guide to Withdrawing Retirement Assets 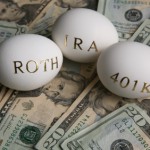 A lot is being written about how much money Americans can withdraw from their investments to fund their retirement years. Now, a new research institute launched by Fidelity Investments has outlined the order in which money should be withdrawn from various tax-deferred and taxable investment accounts. Described as the ‘withdrawal hierarchy,’ the Fidelity Research Institute suggests the order, with modifications made courtesy of other financial planning experts.

2. Liquidate loss positions in taxable accounts. Some investments in your taxable accounts may be worth less than their tax basis. In addition to offsetting realized losses against realized gains, at the federal level you can usually use up to $3,000 ($1,500 for married couples filing separately) of net losses each year to offset ordinary income including interest, salaries, and wages. Unused losses can be carried forward for use in future years.

3. Sell assets in taxable accounts that will generate neither capital gains nor capital losses. Such assets generally include cash and cash-equivalent investments as well as capital assets which have not increased in value. If your withdrawals from this tier in the hierarchy largely come from cash-equivalent investments, sufficient liquid assets holdings should remain intact in order to cover short-term financial emergencies. And be especially mindful of portfolio rebalancing issues.

4. Withdraw money from taxable accounts in relative order of basis, and then qualified accounts or tax-deferred saving vehicles funded with at least some nondeductible (or after-tax) contributions, such as variable annuities and Traditional IRAs that contain non-deductible contributions. The choice depends on the circumstances, and in some cases it might make more sense to tap the tax-deferred vehicle first, but for most retirees, capital gains rates are lower than ordinary income tax rates and generally liquidating capital assets first would be beneficial.

Conversely, if the basis-to-value ratio of the assets to be liquidated in each account is relatively high, it may be preferable to liquidate assets in the tax-deferred account if portfolio demands require it. Note that IRAs are generally subject to certain aggregation requirements when allocating basis. When liquidating gain positions in taxable accounts, it usually makes sense to sell assets with long-term capital gains first, since they should be taxed at lower rates than short-term gains.

If you believe that the withdrawals you make may be subject to different tax rates over the course of your retirement (whether due to changes in tax law or to varying tax brackets as a result of fluctuations in income) you may be better off liquidating one type of account within all of these guidelines before another. For example, it may make more sense to leave your Roth account intact if you thought your ordinary income tax rate was likely to rise in later years, increasing the value of the Roth’s tax exemption.

Estate planning considerations may also significantly impact the entire hierarchy. Generally, qualified and tax-deferred assets may be given a higher order within the withdrawal hierarchy in the case of larger estates expected to hold “excess” assets which will pass to heirs or be subject to estate taxes. Capital assets receive a step-up in basis at death, while qualified and tax deferred assets are considered to contain “income in respect of a decedent” and do not receive a step-up. A number of other issues may also have an effect on the recommended order of withdrawal, like if the retiree’s income approaches the threshold of paying taxes on Social Security income.

This column is produced by the Financial Planning Association, the membership organization for the financial planning community, and is provided by Kristine McKinley, CFP, CPA, a local member of FPA.